After poking around the virtual scrap yard of opinion, I have confirmed my impression that Wells wrote The Invisible Man, primarily as a social satire. No other sum answers the addition of the work’s individual parts. But, if that was Wells intention, I do not think he wholly succeeded.

The Invisible Man cannot make up its mind between sitting in the collapsible chair of a slap-stick comedian, the observation post of the satirist poking his stick at a class system, or the ornamental chair of a flamboyant playwright feverishly penning a melodrama, or the classic seat of a traditional murder mystery writer. One cannot settle this disparity by ticking off the all of the above box. I propose the variance, not as strength of the work, but as one of its chief weaknesses. 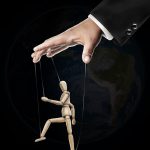 Though the work begins as a comic turn, this reader quickly caught flashes of melodrama until the flame took hold of the story and consumed it. The idea of TIM being a satire arises, I think, from Wells scornful caricature of his tragic protagonist, Griffin. I say caricature because I found the young man Griffin to be two dimensional, a papier mâché effigy; so much so, I couldn’t believe in him; and scornful, because Wells pursued his quarry as a one-man mob.

The character, in my opinion, is so flimsy Wells had to rely on insanity to explain the dramatic turns in the plot. When a person is insane there is no longer much need to base his decisions on a fully developed personality.

Early into the story clues to the protagonist’s weight problem began to percolate in my mind. It started with Griffin’s arrival in Iping. Would an invisible man, who ostensibly wants to remain inconspicuous, do the things he did? Not in my opinion. He was going insane one might argue. But insanity requires irony, the contrast of a former life against a steady or dramatic decline. In Griffin, there is no real back-character to measure contrast. Granted, that may have been due to the intended satire, Wells demonstrating the always apparent, arrogant attitude of the upper educated classes in the setting of simple w 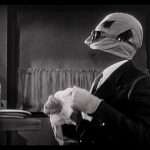 orking townsfolk. Wells is proposing here is a class which is hollow; if you peel back the conventions of class and clothing, you have nothing. In this sense the book and the character have some measure of success, but it falters in my estimation because Wells target is such a propped up, flat cartoon. I cannot accept that every person of Griffin’s class acted with such shallow, unalloyed arrogance towards his or her fellow human beings.

But the story does stick, particularly Wells drawing of the various Iping townsfolk, a class that Wells probably knew better, having had working class parents, a point which does underline the adage, write what you know. Another notable is Wells ability to write with the eye of a dramatist. He certainly does know how to show rather than tell, as demonstrated in many scenes within the Inn at Iping, West Sussex, which unfolded like a live performance in a local theatre.